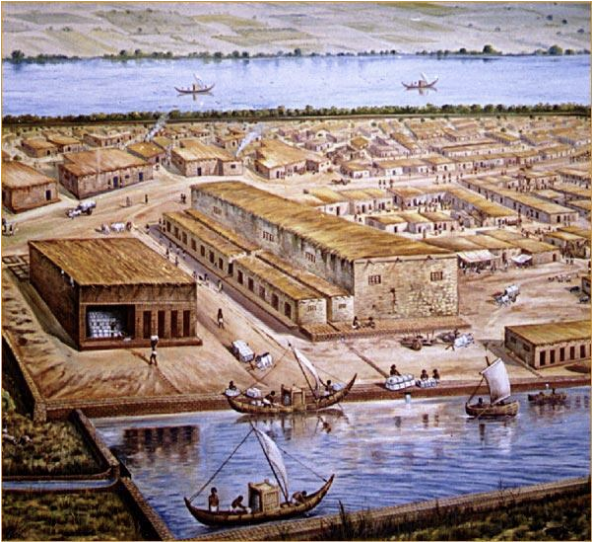 “What we want are Western science coupled with Vedanta, Brahmacharya as the guidingmotto, and also shraddha and faith in one’s own self”- Swami VivekanandaIn

The present time, post-colonial Bharat is progressing towards decoloniality. This will bemarked by the shattering of crisis of confidence and rooting for civilisational values.Recognising ancient Indian science as a tool of shaping modern technology will be one keyendeavours in this regard.

➢ The Rigveda (10.75.8) mentioned that the river Sindhu (Indus) contains gold. Theword hiranyayi was used for the river. Another Rigveda hymn (8.26.18), states thatthe path of the river Sindhu contains gold, and the word used for itis hiranyavartanih. Tucci reported in 1977 that “there was near the Indus (Sindhu)source, as there are even now, great mines of gold in the region of the Manasarovarand in Thokjalyug”.

➢ In Kautilya’s Arthashastra, Gold refining was a two-stage process. The first stage wasthe melting of impure gold along with lead, which removed base metal impurities,but not noble metals like silver. The second stage was to heat impure gold sheetswith the soil of Sindhu State, which contained salt. The sodium chloride present inthe soil reacted with silver and the resulting silver chloride absorbed in thesurrounding soil. This was a solid state process, which involved diffusion of silver inimpure gold and the subsequent formation of silver chloride at the gold-soilinterface. The Miller process of gold refining is based on a similar principle that allimpurities present in gold combine with gaseous chlorine.

➢ The Rasaratnasamuchchaya described three types of ferrous materials, viz, munda,tiksnaand kanta. When iron ore pieces are reduced by charcoal in solid state, ironblocks containing porosity results. For this reason, the reduced iron blocks are alsocalled sponge iron blocks. Any useful products can only be obtained from thismaterial after removing the residual porosity by hot forging. The hot forged spongeiron blocks are also termed as wrought iron.

Modern-day smelting technique of iron is similar to what is mentioned in theRasaratnasamuchchaya.

➢ The Asur tribe of Jharkhand are the first people to make iron in the world usingspecial smelters. The iron made by the tribe has anti-rust property and the processesare much safer, cheaper and eco-friendly. The modern-day smelting processaccounts for about 17 percent of greenhouse gas emissions from the Aluminiumindustry and 1 percent of total global CO2 emissions. Thus, rooting back to the Asurstyle of smelting can help address climate change.

➢ The Agaria technique of iron-ore mining is an sustainable method of miningpracticed in the states like Uttar Pradesh, Bihar, Odisha and Madhya Pradesh. Itinvolves processing iron ore in a low shaft furnace built of clay. Ore is collected fromthe surface and never by digging. This can be a way supplementing deep shaftmining so as to minimise land degradation caused by mining.

➢ At Lothal (Harappan site dating back to 2500 BCE), flat bottomed boats for inlandwaterways were used. The Barges used today for the inland shipping are too flatboated.

➢ Furthermore, at Lothal, a Dockyard has been unearthed. It is a testimony to theengineering skill of the Harappans. This dockyard is the first ever artificial basinconstructed for sluicing ships at high tide. It surpasses the docks made by theRomans and Phoenecians in conception. It is a lined structure with evidence forchannels for inlet and outlet of water. Towards the southern part of the eastern wallof this dockyard is a 7 m wide gap which functioned as a spill channel. Thisconnected the Lothal Dockyard with the Bhogavo river and thence to the Gulf ofCambay. The entire structure has been made in such a way that during high tide,water would swell the channel’s natural flow and push the extra water upstream.The boats used the high tide to dock at the yard. The boats made a return journeywhen the tide ebbed. Extra water was discharged through a water spill channelwhich was built in the southern wall of the dockyard.

➢ Yaktikalparam, a literary text on shipbuilding in ancient India, was compiled by RajaBhoj of Dhara. It provides classification of ships based on operation (ordinary andspecial) and on position and size (Sarbamandira, Madhyamandira and Aryamandira).The treatise provides the significance of Earth’s magnetic fields during shipbuildingand maritime fair. The literature talked about Earth’s magnetic field close 500 yearsbefore Georg Hartmann and Robert Norman independently discovered them.

➢ The Kappal Sattiram is a treatise based on shipbuilding during the Chola period (3rdcentury BCE). Shipping technology was at its zenith during this period and anincreasing number of ships were used to undertake international trade, import andexport of goods and movement of people-groups with religious beliefs. Through theSagarmala project, the Govt of India plans to revive the maritime heritage of Bharat.

If the millennials start viewing Bharat as a scientific civilisational state rather than as amerely a religious civilisational state, their attitude of seeking approvals from the west willundergo significant change. Ending this series through quoting from the book, India, that is Bharat – Coloniality, Civilisation and Constitution,