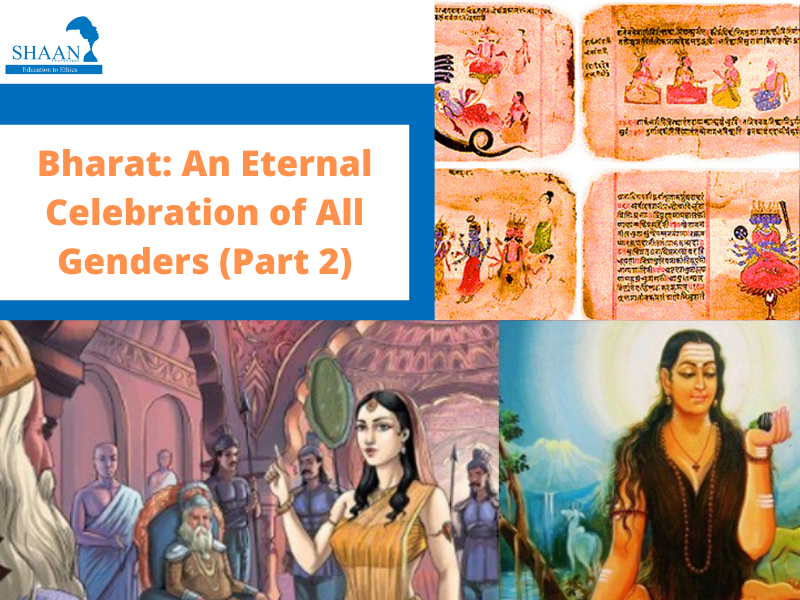 Bharat: An Eternal Celebration of All Genders (Part 2)

Sometimes you think of yourself as a man, sometimes a chaste woman, and sometimes a neutral eunuch. This is all because of the body, which is created by illusory energy. This illusory energy is My potency, and actually both of us — you and I — are pure spiritual identities.  Now just try to understand this. I am trying to explain our factual position. - Bhagavata Purana (4.28.61)

The following list of Hindu deities provides interesting examples of saints, demigods, and incarnations of the Gods associated with gender transformation and diversity. These include:

Beginning with Ardhnarishwar, where Shiva and Parvati amalgamate to form a single human being, with equal parts of both male and female.

Lord Vishnu, who was known to change his forms, did not limit himself to the male gender.  Mohini is a classical example of Lord Vishnu changing his form to become a woman. Vishnu even procreated with Shiva in the Mohini form, resulting in the birth of Ayyappa.

The god of fire, creativity, and wealth is depicted in the Hindu faith as married both to the goddess and Svaha and with the male moon god Soma. Connor and Sparks relate that Agni importantly received Soma’s semen orally. British scholar Phil Hine says Agni gave a divine blow job to Shiva as well, resulting in the birth of Skanda, the god of war.

A Vedic sage and a Job-like figure, this devotee of Vishnu once boasted he was above being a victim of Maya. Vishnu encouraged Narada then to take a dip in a pool, which erased the sage’s memories and turned him into a woman. In that state, Narada would marry a king and produce several sons and grandsons doomed to die in war. While Narada was in mourning, the sage’s gender was restored to male, and he had a greater understanding of the power of Maya.

- Dviretas—he has both male and female “seed.”

- Pavanendriya—he has no discharge of semen.

- Samskaravahi—he is aroused according to previous life impressions.

- Irshyabhirati—he is aroused only by the jealous feelings of seeing other men in the act of sexual union.

- Vatika—he is born without testicles.

Bahuchara Ma is one of the most celebrated figures in the community.

This immortal being of Bharata is termed ‘primitive’ by the colonisers and the colonized minds when fully reclaims to what it was, is, and can be, will be devoid of the crisis of confidence that currently impedes its social development agenda. Just as how Bharat has broken away from the colonial shackles of section 377 of the IPC, it will continue to reclaim its lost glory in its own India Way.