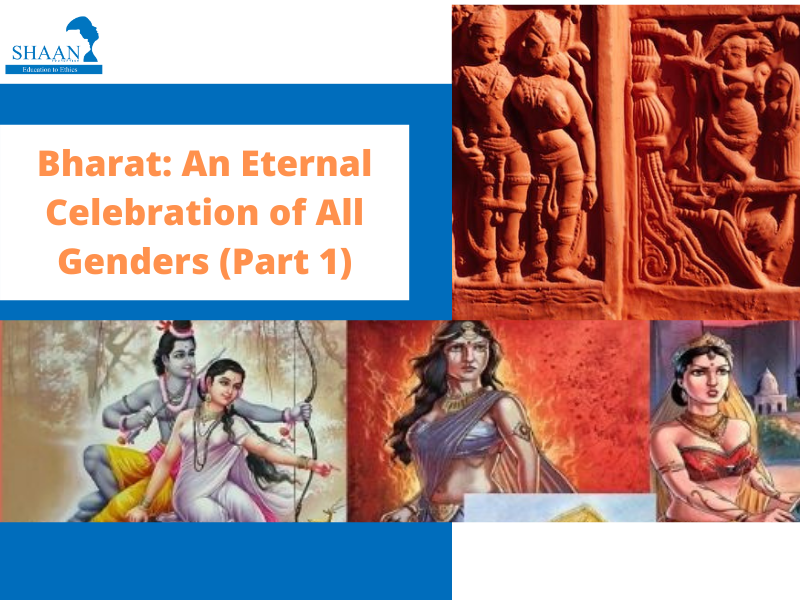 Bharat: An Eternal Celebration of All Genders (Part 1)

The Epics of Ramayana and Mahabharata

The Rig Veda classifies human beings into three genders: pums-prakriti or male, stri-prakriti  or female, and tritiya-prakriti or the third sex. The third sex is categorized under a larger social category of neutral gender. The members belonging to this neutral are called napumsakas (not engaged in procreation). There is no record of persecution of the transgender community neither were they deprived of their basic rights due to their sexual orientation. No Vedic law specifically penalizes third-gender men or women  (napumsa, kliba, svairini, etc.) for their characteristic behavior (homosexuality,  crossdressing, etc.). They could be beaten for certain crimes or killed for grave offenses (like other citizens) but were never fined. (Narada-smriti 15.12-15, Srimad Bhagavatam 4.17.26)

Vedic medical texts (the Ayur Shastra) specifically mention how third-sex conditions  (homosexuality, transgender identity and intersex) are caused at the time of conception.  (Sushruta Samhita 3.2.38, 42-43, Caraka Samhita 4.4.30-31). The sex of the foetus— whether male, female or third sex—becomes manifest during the second month of pregnancy and cannot be changed after that. (Sushruta Samhita 3.3.14, Caraka Samhita 4.4.10, 4.8.19).

The Kama Shastra acknowledges third-gender marriages wherein same-sex couples with great attachment and complete faith in one another get married. (Kama Sutra 2.9.36).

Vedic law books regard heterosexual crimes such as rape, adultery and the propagation of unwanted progeny as the foremost threat to human society (not homosexuality).  (Manusmriti 8.352-387; Bhagavad Gita 1.40-41)

Homosexual desire is not taught or acquired through practice. Rather, it arises naturally from deep within the imagination or psyche. (Kama Sutra 2.1.39, 41-42) Vedic law considers female homosexuality an offense only when it involves the violation of young, unmarried girls (traditionally aged 8 through 12). The offense is fined variously and can include corporal punishment. (Manusmriti 8.369-370, Artha Shastra 4.12.20-21. The women of the Vedic era were living entities of exuberant knowledge.

While the Pride Month in the west is a recent phenomenon, Bharat has been a  cosmopolitan of all possible genders. The Bhartiya society has been marred by distortions and has turned into what is modern-day India. Thus, going back to the very roots of our civilisational ethos will enable us to address a majority of issues that currently plague our society.